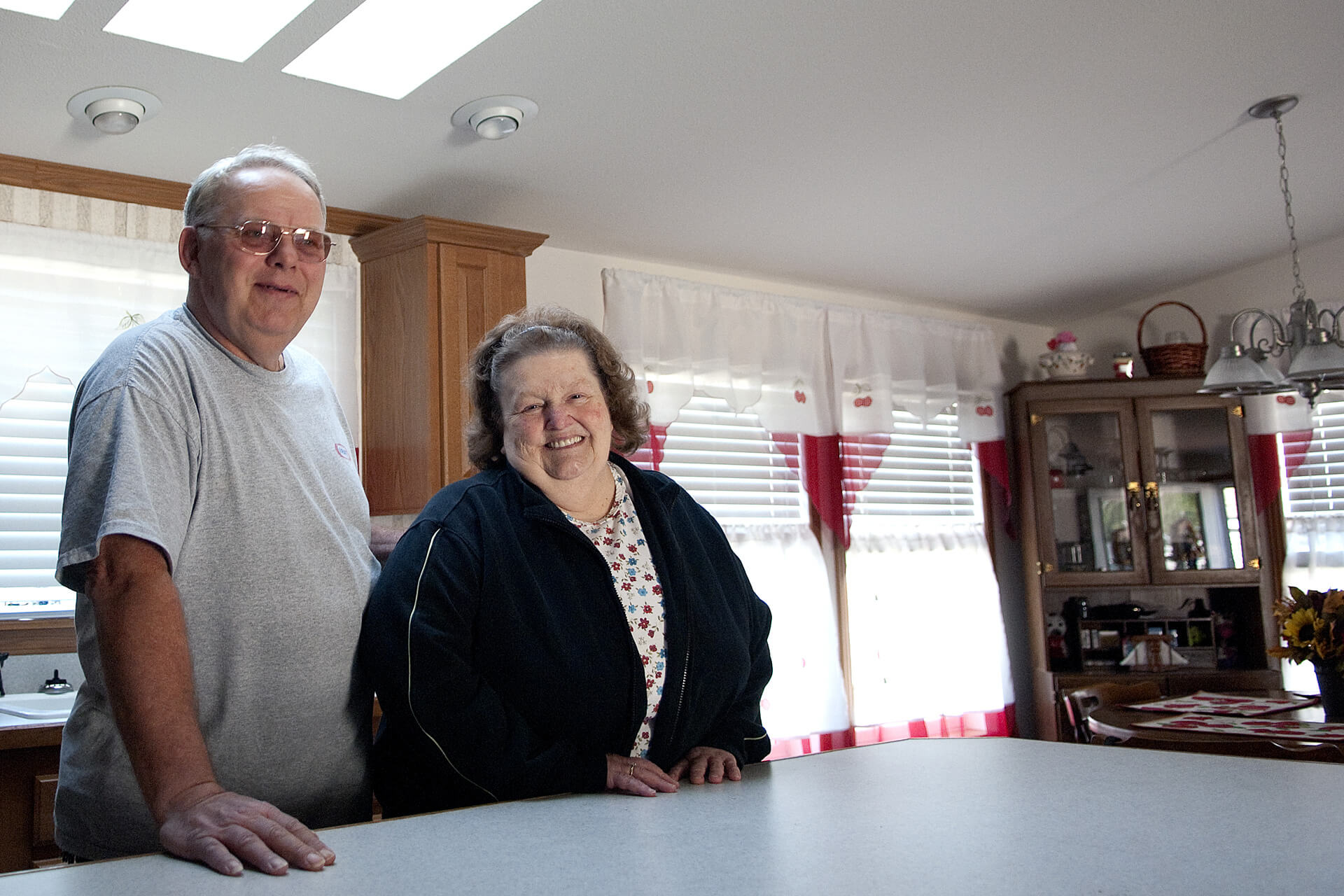 “When she walked in the door, the room lit up,” says Ziggy Zeveckas. “You know how they say a woman glows when she’s pregnant for the first time? Well, she was glowing.”

It wasn’t pregnancy that had his wife, Pat, glowing. Not at age 62. It was the vision, after 43 years of marriage, of owning a home–THIS home–for the first time.

The manufactured home in Otarnic Pond Cooperative in Hudson, NH had wall-to-wall carpeting, a kitchen island, skylights, a hot tub.

Fewer than four weeks later, Ziggy and Pat signed a Welcome Home Loan through the New Hampshire Community Loan Fund and THIS home was their home. They could hardly believe it.

“I kept walking around, looking around, and she’d say, ‘What’s the matter with you?’ ” says Ziggy. “I said, ‘I keep getting this weird feeling somebody wants to knock on my door and tell me we have to leave.’ ”

Cheaper to own than to rent

It’s not that those days were so bad. The couple had been comfortable renting, first an apartment in Lowell, MA, where they raised their three children, then a house in Tyngsboro, MA. They had good landlords and reasonable rent. Ziggy, a Navy and Coast Guard veteran, worked in and around Lowell as a stationary engineer. Pat worked in the plastic mills before retiring with a health disability.

Their parents had died young, so Pat and Ziggy were always on their own financially. “We could never save enough for a down payment for a house,” says Pat. “Every time we turned around, the kids needed glasses or the dentist or whatever. …”

Buying a home didn’t become a real option until wastewater issues forced them to vacate their Tyngsboro house. They were shocked by the rental prices–two and three times what they’d been paying.

A realtor in Hudson showed them a couple of homes at Otarnic Pond, a resident-owned community. Pat was smitten by the features in the four-year-old double wide home. Ziggy, the engineer, examined the building top to bottom and was impressed by the workmanship. And the monthly mortgage was less than they’d pay for rent.

For the Zeveckases, owning a home in the quiet cooperative means safety, security, satisfaction and comfort. For the first time, their home is an investment.

“I never thought it would end up like this,” says Pat.

This article was originally published in the Community Loan Fund’s 2010 annual report.