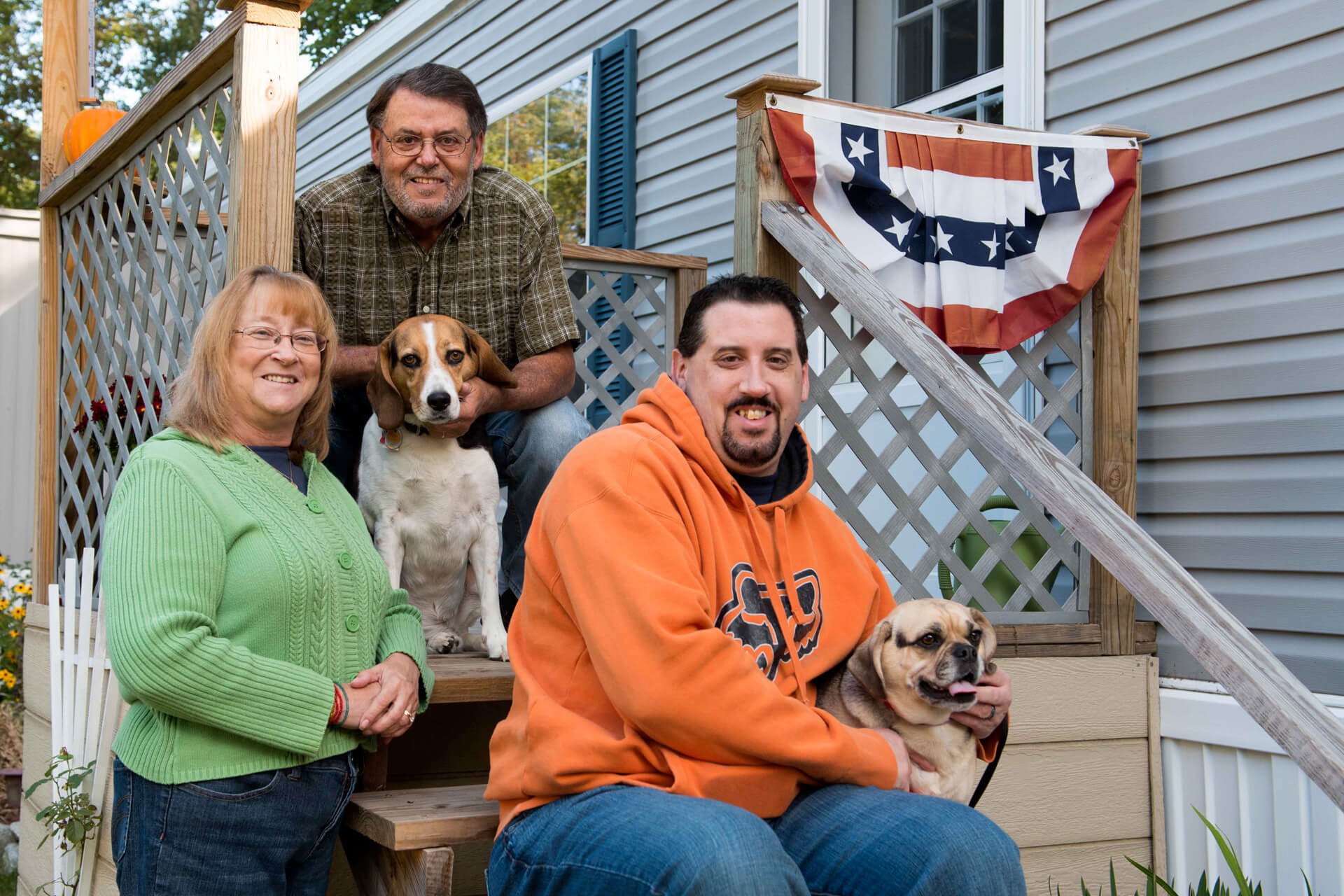 When you’ve enjoyed not having a house payment for 30 years, you’ll put up with some inconveniences.

For Larry and Brenda Woods of Swanzey, a ceiling panel crashing onto their kitchen floor was one too many.

“I was watching the football game when I heard a plunk, and I look, and a panel of the ceiling came down,” says Larry. “I went to pick it up and it fell apart.”

The 40-year-old manufactured home had seen good times. It cost about $7,000 new, and the Woods paid it off in 10 years. They added a bedroom, a den and a shed in the back while raising a son and daughter there.

By 2011, those better days were gone. “I would never have people come over because of the house,” Brenda says. “It was in such bad condition, I was embarrassed.”

The roof leaked through several layers of patches. The kitchen ceiling sagged so much that the cabinet doors wouldn’t close. The floor was rotting. The town’s building inspector said the weight of a new roof would buckle the walls.

The couple briefly considered getting a home on a small plot of land and even qualified for a bank mortgage, but Pine Grove MHP had been their home since 1971, shortly after Larry returned from Vietnam. When they decided to stay put, Brenda was surprised to learn that the same bank wouldn’t finance a replacement manufactured home.

“I thought the market had changed,” she says.

The Woods knew they had another option. The previous year, Larry had co-signed a home loan from the Community Loan Fund so their son could buy the house next to theirs. They applied for their own loan and were approved on Brenda’s birthday.

Three months later, on July 2, they moved into their brand-new energy-efficient home. “It’s awesome. I still have moments when I can’t believe it,” says Brenda.

She and Larry beam when showing off their new home: A carpeted living room with ceiling fan, generous kitchen, eight-foot ceilings, windows that glide and tilt out, and what Brenda calls their “bed-and-breakfast” bedroom. They have a TV room for the grandkids, a den for Larry’s model train layout, and even a guest bathroom.

The Woods say they joked throughout their first winter in the new home: “Look at the ceiling, it’s falling in.” In their old house, Larry says, “That was the norm.”

The new norm is weather that stays outside and heat that stays inside. They’re paying a lot less both for heat and electricity. And Larry, who battles lymphoma as a result of chemical exposure in the military, shouldn’t have to shovel the roof for many winters to come.