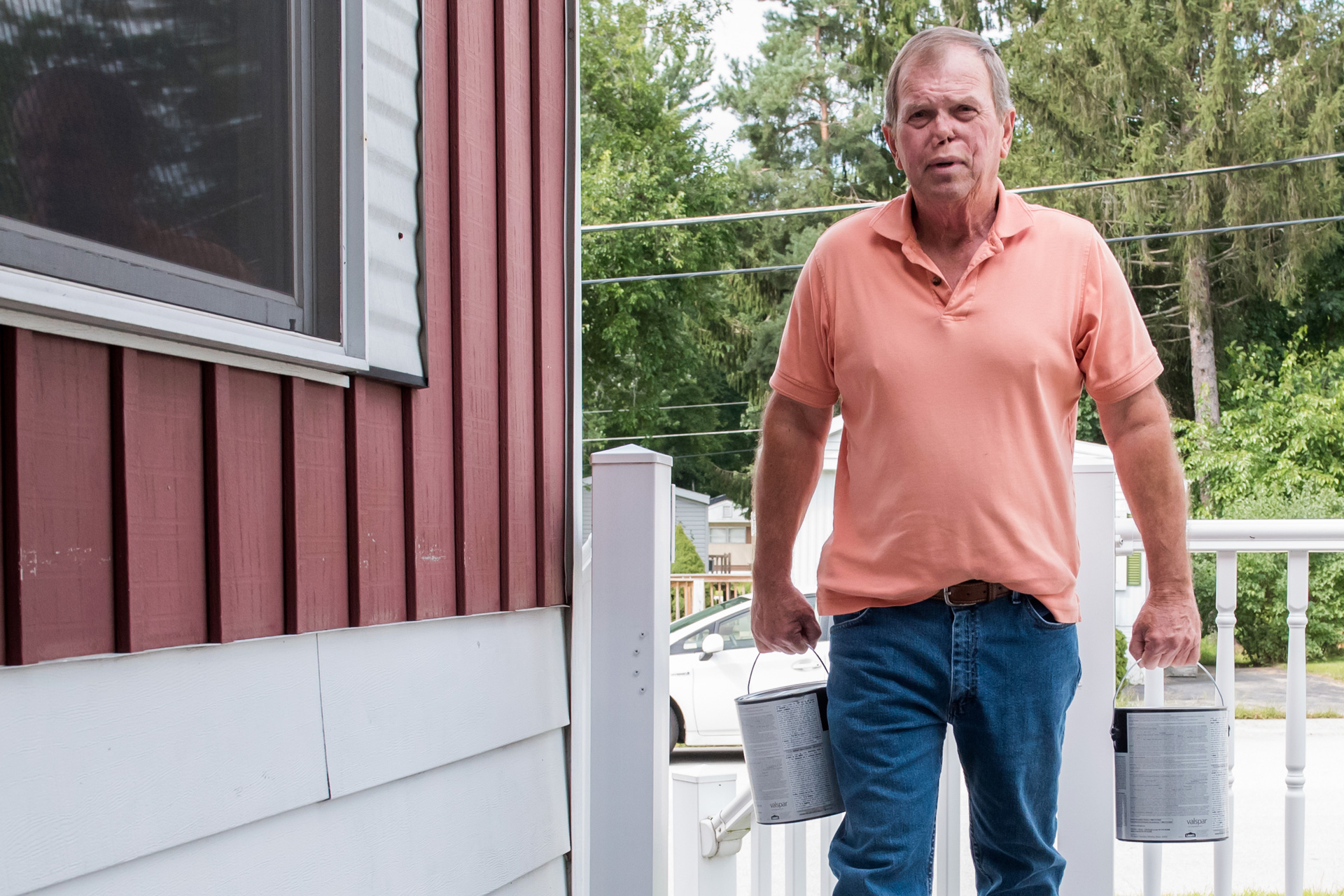 Cancer survivor got a second chance at life, and a home

Some would call Donald Winslow a lucky guy.

He just shrugs. Whatever happens, happens, he says. It’s meant to be.

Seven years ago, what had started as a blemish had become a cancer that consumed most of his face and crept into his brain. Doctors gave him 2½ months to live. Aggressive chemotherapy might add a 10% to 20% chance of giving him a few more months.

Ten to 20% was better odds than zero, he figured. He signed up for the chemo.

Donald Winslow on his deck at home“It was a journey,” he says, a years-long journey of chemicals and surgeries. The low point was the day he lay in bed, emotionally and physically spent, his bones aching, thinking all he needed to do was close his eyes and his time may be up.

Suddenly, he says, something told him to get up NOW. He got dressed, and went downstairs. “And ever since then I started climbing back.”

A place of his own

Before he got sick, Donald rehabbed and sold houses. By last winter, he was living in a one-bedroom apartment, saving some money, and thinking about getting a place of his own again. He drove around southern New Hampshire looking at homes and jotting down the phone numbers on For Sale signs.

One was outside a manufactured home in Camp Sargent Road Cooperative in Merrimack. He called that number the day he got a $364 electricity bill and decided he needed out.

That was a good move, for two reasons. The asking price for the fixer-upper had just dropped from more than $70,000 to $45,000. And by choosing a home in the Camp Sargent co-op, he was eligible for an only-in-N.H. home loan program that would save him additional thousands of dollars.

People who borrow to buy manufactured homes typically pay interest rates several points higher than those for site-built homes. But in a handful of resident-owned communities in N.H., including Camp Sargent, homeowners and buyers can get mortgage loans with low down payments and conventional interest rates. The Home Preferred loans are offered by N.H. Housing, with the N.H. Community Loan Fund and four other lenders.

That meant Donald only needed a small down payment and got a loan at an affordable rate. When he needed help reading the loan documents—the cancer had robbed him of his close focus—loan originator Pamela MacDonald of the Community Loan Fund’s Welcome Home Loan staff sat with him and read them aloud, making sure he understood.

Moved in, and cancer free

He bought the place in March and, with help from a friend, began scraping, painting, pulling down wallpaper, and pulling up rugs. The previous owners were elderly and hadn’t been able to take care of the place, so the work took them three months, with a couple breaks for hospitalizations.

Donald moved in on a Sunday in late June. The place looked crisp. He measured for curtains and was already thinking of what he wanted to do with the carport and the small deck in the back. All this and he was saving close to $300 a month compared to what he paid to rent.

The next day, Monday, he had an oncologist appointment.

For the first time in seven years, Donald was cancer-free.