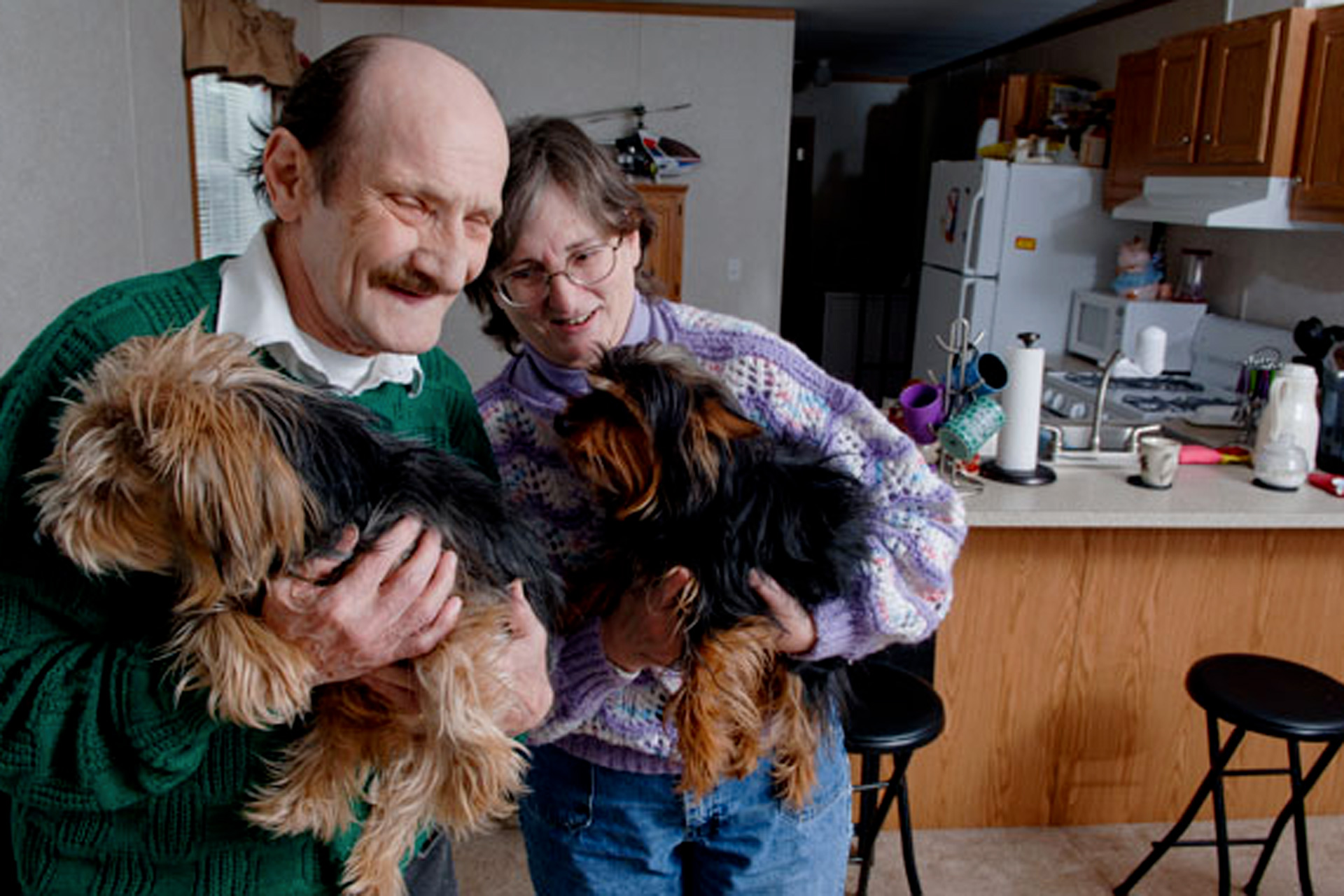 “We have no credit, who’s going to give us a loan?”

Their 43-year-old manufactured home was cramped, dingy and drafty. The ceiling and walls were filled with mold. The seams of the ply board were pulling apart. There was no insulation.

“It should have been condemned,” says Gary. “We were in constant agony. We wouldn’t let people come in. We were too embarrassed.”

Finding a replacement home was easy. Dawn immediately started looking, and the couple soon settled on a new home from Concord Homes.

The next step was finding financing, and the Thulins expected that not to be so easy. “We didn’t have bad credit, we always paid for everything in cash – we just didn’t have any credit at all,” says Dawn.

Through their experience on the Board of Directors at Breezy Acres Co-op in Epsom, Dawn and Gary knew that the New Hampshire Community Loan Fund financed manufactured homes in resident-owned communities. But with no credit, they doubted they would be approved.

‘What extras can we afford?’

Dawn began the application in April. “Because of our lack of credit, we had to provide Ron (Welcome Home Loans Mortgage Loan Originator Ron Thompson) with proof that we actually pay our bills,” said Dawn. The Community Loan Fund requires applicants who lack a traditional credit score to provide alternative credit, such as rent, car insurance, utility, cell phone or cable bills. The alternate credit needs to show on-time payments for at least three of these types of credit for at least one year.

“We had to provide bank statements from the past year, copies of bills and cancelled checks to show they were paid, and information letters from companies we dealt with, as well as permission from our Board of Directors,” says Dawn. The co-op has to approve any new home moving into the community.

Every step of the way, says Gary, the Community Loan Fund staff helped make sure he and Dawn had all of the necessary information together. It wasn’t long before their focus shifted from “Can we get a loan?” to “What extras can we afford?” They added a dishwasher, a second bathroom, and the Energy Star package to the purchase.

“When we learned about the cost of the pad, we thought it would be a deal breaker. But it was rolled right into the financing and we let out a sigh of relief,” says Gary.

The financing package included the home itself as well as the pad, transportation and the installation. The only out-of-pocket costs were a 5-percent down payment when they ordered the new home, as well as the front stairs, utility hookups and building permits.

“We finally closed on October 28. I cried, I was so overjoyed. Every time I told someone about it, I cried!” says Dawn.

Dawn and Gary were out of their home for one month. “Concord Homes was very accommodating. They put us in a rental unit right down the street. We were loving the rental; it was nicer than the home we had just seen crushed and put into a dumpster,” says Gary.

It was the longest month ever, but the wait was worth it. Gary said. Although their neighbors kept asking if they had seen the new home, he was so nervous that he wouldn’t go up there until they said “MOVE THAT BUS!” It was like the television show Extreme Makeover: Home Edition.

‘We got our normal life back’

When Dawn and Gary finally moved into their new home, they had half-again as much space as in their old house: three bedrooms, two baths, and plenty of storage.

Dawn found that she wanted to cook and clean: “It is so much easier with more space.”

Gary also noticed a change. “I am less tired, and not groggy. I didn’t realize I was sick until I got better. The mold, the constant draft, and the cold slowly made me sick over a long period of time. … I was never warm like I am right now!”

The new home has 11 inches of insulation in the roof, 7½ inches under the floor, and 6 inches in all outer walls, and it is 75 percent more efficient than the old one. Gary says the energy-efficiency package has already paid for itself. “We can walk around in our stocking feet,” says Dawn.

“We feel like we finally got our normal life back,” says Dawn. Gary is now excited about having people over to visit. Dawn has organized an open house for everyone in the co-op to see their new place.

This is Dawn and Gary’s new home, their new reality, even if it still feels unreal. As Dawn says, “We wake up in the morning and we feel like Alice in Wonderland going down the rabbit hole.”