"The arc of capitalism definitely bends towards injustice"

It was a very pleasant surprise to get Mark’s call three weeks ago. After the shock wore off, all I could feel was pressure to say something really wise today, but then I decided to just relax. 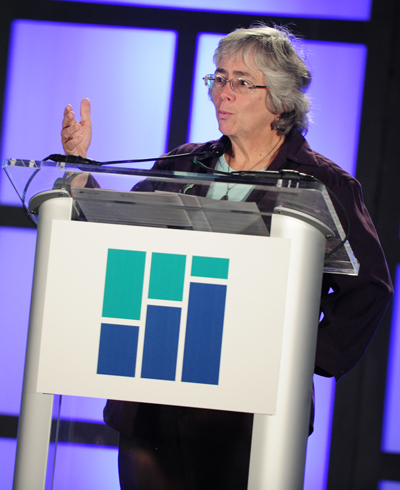 I still feel like we are still inventing what we do. Our organization still feels really young to me and our industry even younger.

I’d like to start by appreciating the members of the New Hampshire Community Loan Fund staff and board that are here today: Nadine Salley, Rick Minard, John Hamilton, Steve Varnum, Carrie French (she and I are the executive team but I tend to get all the credit for her work) and board members Sara Varela and Michael Swack.

Just to be clear: It takes a village to raise a CDFI CEO!

The number one person in that “village” who raised me is Michael Swack – he founded the Community Loan Fund and helped start this industry association, too. There is no one better to strategize with than Michael; he has the academic’s eye for the big questions while I am buried in specific problems, but he’s also enough of a practitioner to help us design tactics that are bold, but totally practical.

I send a special thank you to you, Michael, for all you’ve done for the Community Loan Fund, for this industry and for me personally. Thank you.

Along with Michael, my CDFI lineage starts with Chuck Matthei, who died 10 years ago.

Chuck led the creation of our national association after working with Michael in the founding of the New Hampshire Community Loan Fund in 1983, and then Michael hired me to make the idea operational.

But it was Sister Louise Foisey who taught me the nuts and bolts of our trade. The Sisters of Mercy were the first lenders to us and the first for many other loan funds, too. Their tough and principled approach demands high social impact and reliable repayment. They set the original tone for our industry and it serves us well today.

I don’t want to get too nostalgic about the early days. Louise was unimpressed with my new MBA and initially skeptical about me in general.

Michael was glad to hire me, but I was the only candidate for the part-time job they advertised.

I was lucky to find a job with a purpose, one that let me channel my considerable anger about all the unfairness in our economic system.

I first learned about injustice as the younger sister of two brothers who I followed around and wanted to do all the things they were doing.

I’d say I was a “proto feminist” by the fourth grade and my protests kept getting me in trouble as I got older – no Little League for girls and I couldn’t be an acolyte at church.

As an eighth grader in New Jersey, I expected to take over my brother’s newspaper route that he had taken it over from our oldest brother when he went away to college, but in the '60s, you had to be 14 years old and a boy if you wanted to be “a paper boy.”

But my parents let me take it over and just keep it in my brother’s name. By that time, I was too busy with sports and school clubs to actually deliver the papers every afternoon, so I hired other girls and younger boys to do that work and I did all the collecting by mail, since handling the money is what can get little kids in trouble.

Within a year, all the paperboys in town were handing their routes to me so I’d do their collecting. They’d get paid the same because I got a volume discount as my business grew.

That was my start as a funky capitalist and I learned a lot!

First, it was really fun to have my own earned money, to be independent and to pay for whatever I needed and to be able to save for whatever I wanted to do in the future.

I now see that is a universal desire of adults to have the security and confidence to be self-supporting – it’s the basis for our industry’s excellent repayment rates.

Secondly, in all the ups and downs of my five-year experience: management changes, technology upgrades, labor strikes, and corporate mergers, my life-changing lesson was to observe that the arc of capitalism definitely bends towards injustice!

I left for college wondering why the economy couldn’t work better for everyone?

I am lucky to have a job that lets us try to tweak capitalism to make it a just little bit more fair.

Our specialty as opportunity finance practitioners is to see the economic strength of people that the bigger system doesn’t see at all or only sees as having weaknesses.

For example, 8.8 million people live in manufactured homes, about a third of them renting land in about 50,000 parks. Most of these homeowners have to pay cash for their homes or deal with financing designed for cars.

Manufactured housing is a larger stock of affordable housing than all the Low Income Housing Tax Credit, rental voucher and public housing combined. Household incomes average less than $30,000, or about 60% of area median income. This unsubsidized affordable housing is well worth preserving and improving.

In New Hampshire, 103 parks have converted to cooperative ownership – more than 6,700 homeowners in resident-owned communities control about 20 percent of that segment of the real estate market. Those families and elders are now:

We’ve made almost $70 million in loans, leveraging two to three times as much for acquisition and improvements. Our loss rate is zero for that loan product. The conditions that make them cash cows for park owners also make them an excellent credit risk.

With the land secure, we could then make $25 million in single-family mortgages to 600 homeowners over the last 10 years with a repayment rate of well over 98 percent. The availability of our “real mortgages” for homes on secure, cooperatively owned land means these homes appreciate better as a family asset.

We developed this product so homeowners in cooperatives would get the same terms as homeowners on their own land, but it turns out they aren’t getting a very good deal either, so we just launched a new mortgage product for them.

For all the success of these cooperatives and homeowners, the cold hand of capitalism isn’t applauding. Every new deal is difficult because the industry is not interesting in being “transformed.” They make money treating these homes like cars, even though it causes their customers avoidable depreciation.

I hope more of you will join with ROC USA to engage in this market, which has been neglected and disparaged. ROC USA is now active in 22 states and has helped convert 26 communities in 11 states outside of New Hampshire, opening up a new single-family lending opportunity for any of you.

I want to be sure and give a shout-out to all of our fellow small-market CDFIs. We may not have the population base to go to scale broadly, but we have rich knowledge of micro-market dynamics and can go to scale deeply in the places we operate.

ROC USA will take the resident-owned community strategy to scale widely as a national CDFI, hopefully with your participation, while in New Hampshire we will continue to build on the preservation strategy.

For example, we are now financing the replacement of older, pre-HUD code homes with energy-efficient ones.

When Chuck Matthei and Michael were orienting me on what a community loan fund was all about, they explained we needed to do two things.

The first is our obvious purpose – finding opportunities for excluded people to participate in the economy by getting them access to capital.

But Chuck emphasized that we also have to talk to people with capital.

This second purpose is based on the belief that there is plenty of capital out there that is owned or managed by people who would like to put it to use for basic human needs if they only had a way to do that.

This is the genius of our industry – we can borrow and use money for charitable purposes and then pay it back when the lender needs it.

It’s individuals, by far, who own most of the capital in the United States. For example, there are $4 trillion saved in Individual Retirement Accounts, with most of it invested in money market funds. Individuals are choosing low rates and leaving them in one place for a really long time – doesn’t that sound like our kind of money?

Of the $60 million of payables in our capital pool in New Hampshire, 20 percent comes from individuals. That’s $12 million from 370 investors with most in the $5,000 to $20,000 range for a four-year term. They renew almost 90% of the time. They have both high and low net worth. A few of those investments are self-directed IRAs.

Some investors are preschoolers with their future college funds. My daughter’s college savings were invested in the New Hampshire Community Loan Fund for over 10 years, with repayment timed to cover her sophomore year tuition.

The place to start for talking about capital is with ourselves. Do we each personally have some of our savings invested in communities and in CDFIs? If we don’t, how do we talk authentically to others about it?

If you are feeling tentative, there are a handful of funds that accept individual lenders, Calvert Notes, or, depending on which state you live in, feel free to invest in the New Hampshire Community Loan Fund as your trial run. We’d be happy to put it to use. We haven’t lost anyone’s money yet, but past performance is no indication of future performance!

I better stop, now that I have reduced myself to almost soliciting you. What I do hope you will remember is that:

I want to thank the board of the Opportunity Finance Network for this honor. I am proud to represent everyone that helped make our body of work at the New Hampshire Community Loan Fund worthy of recognition.

Also, the good company of previous award winners inspires me to continue our endeavors with my good colleagues in New Hampshire, at ROC USA and in this CDFI industry as we all keep growing up together.

I promise to keep doing my part to help bend that arc of capitalism a little bit closer towards justice.