"The best of who we are and what we are"

Introductory remarks of Mary Rogier, President of the Northern California Community Loan Fund, in presenting New Hampshire Community Loan Fund President Juliana Eades with the 2012 Ned Gramlich Award for Responsible Finance. The award was made at the national conference of the Opportunity Finance Network Oct. 18, 2012 in San Antonio, TX.

Hello everyone. I am honored to be here today to introduce Juliana Eades – the distinguished CDFI leader and founding President of the New Hampshire Community Loan Fund – as the 2012 recipient of the Ned Gramlich Award for Responsible Finance. Julie is only the fifth person to receive this high honor, and it couldn’t be more well-deserved.

This annual award, named for a powerful advocate for CDFIs, recognizes a person who has devoted his or her career to advancing the CDFI movement’s core values – social, political and economic justice. As Mark Pinsky explains it, the Gramlich award recipient should “reflect the best of who and what we are.” 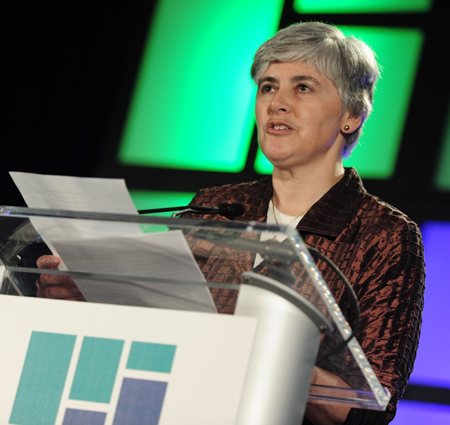 Julie fills the bill on all counts. She is a paragon of CDFI leadership whose deep commitment to communities and ability to come up with innovative, scalable products have made an enormous impact, both in her state of New Hampshire and across our nation.

Julie is one of the founders of the national opportunity finance movement. She has played an important role in this movement since 1984, when she became the founding executive director of one of the country’s first CDFIs, the New Hampshire Community Loan Fund.

She also helped found OFN, and served on its board during a pivotal time in its growth.

A tireless entrepreneurial thinker and market innovator, Julie is driven by a deeply-rooted belief that underprivileged people, families and communities should have access to the same opportunities as their more fortunate neighbors.

What makes Julie’s work so successful is her unparalleled ability to create new opportunities to help disadvantaged people in ways that build wealth, strengthen communities, and grow innovative initiatives to scale.

Julie’s ability to do this has resulted in a constant stream of high-impact products and programs over the years, all designed to respond to the particular needs of people in New Hampshire’s most distressed communities.

Under Julie’s energetic leadership, her organization has grown substantially – and now has over $80 million in total assets. Throughout her tenure as CEO, Julie has continued to focus on understanding and creatively addressing the severe economic challenges faced by low income families in her state.

As one of her colleagues told me, “Julie is all about mission, mission, mission. Every decision she makes, and all of her instincts, are about serving the people we are trying to help.” This strategic clarity and consistent vision has resulted in a flood of creative new ideas coming from New Hampshire that the rest of us have come to expect from Julie and her superb staff.

Julie and her team created resident-owned coops and developed a first-ever CDFI fixed-rate mortgage – turning a losing proposition into a life-changing opportunity for people for whom homeownership would otherwise never have been possible.

There are now 103 resident-owned communities in New Hampshire – that’s about 20% of the manufactured housing parks in the entire state, and thousands of new homeowners who for the first time are able to enjoy the economic benefit of homeownership.

Along with recognizing this impressive achievement, and the equally inventive microenterprise and asset-building programs that Julie and her team have created, this award also is meant to honor Julie’s stellar reputation among her fellow CDFI practitioners. She is a universally respected, much-admired and well-liked peer.

Julie has inspired her fellow CDFI practitioners to work, think, and dream big dreams – always starting from the heart of our shared mission. She always has made herself available to other colleagues, and brings unusual wisdom and humility to the process. As her longtime co-worker Al Cantor said: “Julie inevitably deflects all praise onto the staff and onto our borrowers and partners. It’s never about the glory of Julie – it’s about getting the work done and helping people. “

As some of us know, it is a singular pleasure to interact with Julie – whether sitting at a meeting with her, or hearing her on a panel. The first thing you notice is her unassuming, friendly, genuine manner. She certainly has charisma, but it’s a quiet sort. People just feel comfortable around her.

Soon after that, you notice her quick wit, her incisive intelligence and ability to cut right to the heart of the matter. And then, as you keep listening – you begin to realize how generously Julie shares her experience, enthusiasm, and encouragement. Best of all, she does this in the most down-to-earth, respectful, kind, and modest way possible. She does it because she truly cares about our shared mission – and because she truly believes that, working together, we can broaden the impact and success of the whole industry.

The depth and tenure of Julie Eades’ work in New Hampshire is an exemplar for all of us who work in this field – whether they’re veterans like me or younger people just discovering CDFIs as a possible profession.

As OFN Board member Alan Branson commented, “Julie is an example of what is possible and attainable by many in the industry if we stay the course, maintain the commitment, keep the faith. Julie’s work gives me the hope that my region can be better, if we keep at it, keep pushing the flywheel, taking another step forward every day.”

Of course Julie’s accomplishments have not gone unnoticed, as evidenced by the literally dozens of awards and honorary degrees she has received. However, I know Julie well enough to know that while she appreciates the recognition, she remains much more interested in the good that she and her team can accomplish going forward.

Nearly 30 years after helping to start a movement and building a model CDFI, Julie remains as thoughtful, as creative, as intellectually vibrant, and as committed as she has always been. Julie has made a profound difference in the lives of people that CDFIs exist to serve – and she still making a difference, every single day.

On behalf of all your fellow practitioners, thank you, Julie. Thank you for setting the standard of excellence for our entire profession – and thank you for so generously helping us learn how to achieve it.

You are without a doubt the best of who and what we are.

I am delighted to introduce you to the recipient of the 2012 Ned Gramlich Award for Responsible Finance, Juliana Eades.